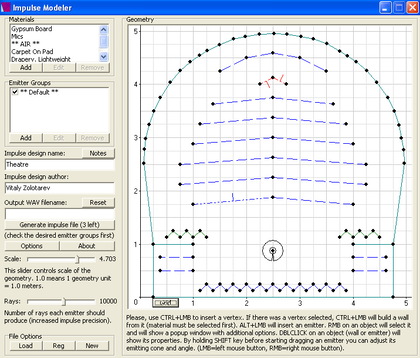 This is an amazing tool for those who use convolution reverberators (processors) in their soundworks.  This tool will help you to design your own room impulse responses ranging from small rooms to large echo halls to small "intimate" cabinets to echoing soundscapes.  You have the opportunity to design materials and room's geometry.  There is a bunch of other settings too.  These are room's size which really alters perceived size, density control which allows to create maximally dense reverbs, "random seed" parameter which allows to create endless number of variations of the same room design.  You can also set output sample rate and bit depth.  After you have designed your room you just need to press "Generate" button and after a while a freshy WAV file will be ready to be loaded into any convolution reverberator for your listening pleasure.

We want to emphasize that Impulse Modeler is an artistic tool.  It was designed mainly for musicians, sound designers and sound engineers.  If you are looking for reverbs you cannot get anywhere that are maximally convincing and easily controllable, Impulse Modeler is a tool for you.

As for Impulse Modeler usage, everything is very simple.  You just model a room from the "top" view placing vertices and interconnecting them with the walls, put one to several impulse emitters that "throw" rays into various directions specified by the emitting cone (showed as a partial pie) and finally you put a wall that recepts rays (showed with a dashed line).  When ray touches this "recepting" wall, that ray will be reflected in the final impulse response file.  Everything is that simple.

Unregistered demo version is not strictly limited - it just cannot save design files so that you must always start from the scratch.  Of course, generated impulses are not limited in any way.  Additionally you must restart program after several generates.  This was made to encourage you to buy this nice program.

Very soon Impulse Modeler will be much more "actual" since processors' power is increasing very fast.  In the near future running several convolved reverbs in one project would not be a problem at all.  So everyone will go to search for some good impulses, but those who already purchased Impulse Modeler can create their own impulse files and even offer them to others! 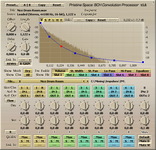 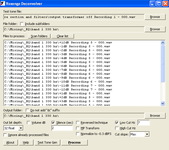