May 11, 2022: Voxengo is happy to release TEOTE version 1.10, an automatic spectral balancer plugin for professional music production applications, available in AAX, AudioUnit, VST, and VST3 plugin formats, for macOS and Windows computers.  TEOTE was designed to be a very useful tool for both mixing and mastering.  It automatically performs such tasks like gentle resonances taming, de-essing, tilt equalizing, usually performed during mixing and mastering.  In mixing, TEOTE sounds good on pretty much any material.

The “C/S/F” selector adjusts envelope follower’s topology.  While the numerical modes adjust timings, this selector specifies structure (or schematic) of the envelope follower that produces a dynamic envelope.  The “C” mode is a “classic” topology first introduced in TEOTE 1.0.  The “S” mode is a symmetric topology which is similar to the “C” topology, but with some of its boost-cut asymmetries removed.  This is now a default mode as it produces a comparably less “muffled” sound; however, this mode may require a lower “Slope” setting since it sounds brighter.  Compared to the “C” topology, the “S” topology produces fewer low-frequency overshoots and has a more pronounced mid-frequencies, but it sounds less “vintage”, subjectively.  The “F” topology implements a filter-like schematic which works as a low-pass filter, without attack-release switching logic.  This topology usually sounds overly snappy and “in your face”, so adjustments of the “Base Atk” and “FX” parameters may be required; this mode does not require the “Base Rls” parameter. 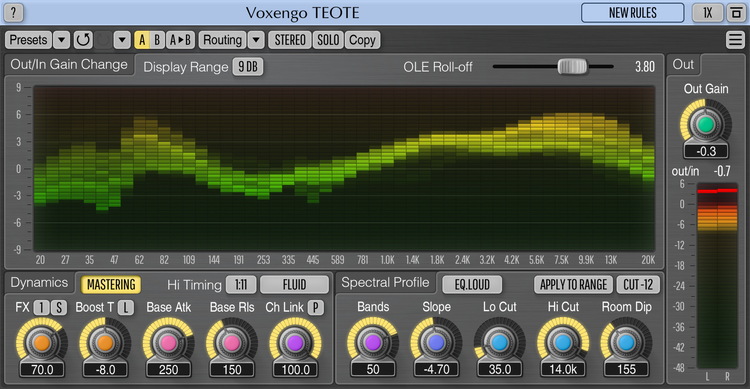 While by definition TEOTE is a dynamic equalizer, its technology is solely based on multi-band dynamics processing.  This allows TEOTE to have only minor phase issues, and to produce a subtle transient-emphasis effect associated with dynamics processing.  TEOTE tries to make the program material follow the specified spectral profile, tuned to the contemporary mastering standards by default.  It can be said that TEOTE “straightens” the frequency response, making further adjustments a lot easier; it removes a lot of repeating work.

“TEOTE” is an acronym for “That’s Easier On The Ear”.  TEOTE is a serious contender in helping bring your music production to the next level!

Demo version of TEOTE can be downloaded freely at the Voxengo web site: https://www.voxengo.com/product/teote/