December 12, 2022: Voxengo is happy to announce the release of SPAN Plus version 1.21 - an extended real-time “fast Fourier transform” audio spectrum analyzer plug-in for professional music and audio production applications.  SPAN Plus is available in AAX, AudioUnit, VST, and VST3 plug-in formats, for macOS and Windows computers.

SPAN Plus is an extended version of the freeware SPAN plug-in: SPAN Plus provides several additional features such as PNG file export, real-time spectrum import/export, static spectrums display, and a “wide” spectrum display.

Changes in this version: 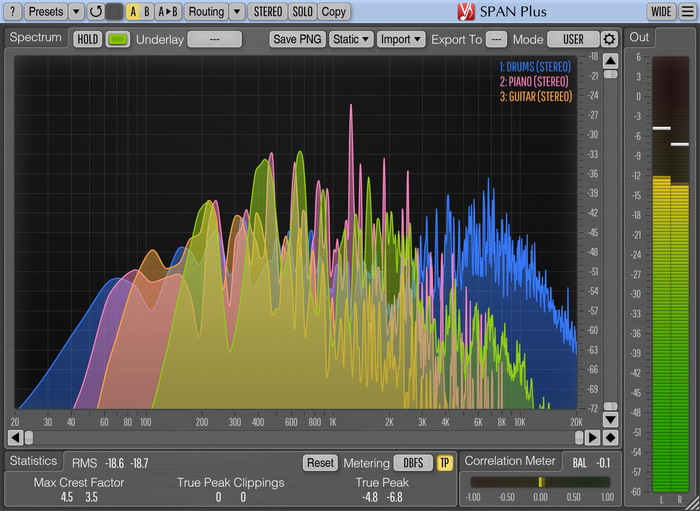 SPAN Plus provides you with a very flexible “mode” system which you can use to setup your spectrum analyzer preferences.  You may specify Fourier block size in samples, FFT window overlap percentage, spectrum's visual slope.  Beside that you can choose to display secondary spectrum of a desired type (e.g. real-time maximum, all-time maximum).  Spectrum can be smoothed out visually for an easier examination.

SPAN Plus supports multi-channel analysis and can be set to display spectrums from two different channels or channel groups at the same time.  Spectrum's color can be chosen to taste.

Demo version of SPAN Plus can be downloaded freely at the Voxengo web site: https://www.voxengo.com/product/spanplus/